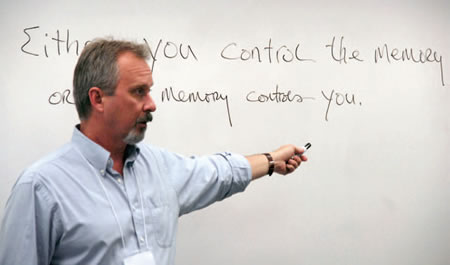 Jake Agatucci, Mentoring Program Coordinator. Jake served in the Army from early 1990 to late 1994, doing his best to avoid being forward deployed with the 21st Theater Army Area Command in Germany and the 101st Airborne Division in the States. Despite his best efforts, as a photojournalist he was afforded brief but terrifying stays in Sarajevo and Somalia during his enlistment. Currently he enjoys REMF status as a professor of composition and literature at Central Oregon Community College, where he teaches writing, fiction, film, and digital games culture.

Jerri Bell. Instructor/editor. Jerri Bell retired from the Navy in 2008; her assignments included antisubmarine warfare in the Azores Islands, sea duty on USS Mount Whitney and HMS Sheffield, and attaché duty at the U.S. Embassy in Moscow, Russia. Her fiction has been published in a variety of journals and has been nominated for a Pushcart Prize; her nonfiction has been published in journals and newspapers, and on blogs. She and former Marine Tracy Crow are the co-authors of It’s My Country Too: Women’s Military Stories from the American Revolution to Afghanistan, published by University of Nebraska Press/Potomac Books in 2017.

Ron Capps. The founder, director, and curriculum developer of the VWP, Ron served 25 years in the Army and Army Reserve and is a veteran of the war in Afghanistan. He is an award-winning writer and songwriter whose writing has appeared in Time, The American Interest, Foreign Policy, The New York Times, The Delmarva Review, JMWW, the Little Patuxent Review, Prime Number, and Riverlit. Three of Ron’s essays have been listed as notable in Best American Essays (2012, 2014, and 2015) and one received special mention in the 2015 Pushcart Prizes. Two of Ron’s songs won medals (1 Gold (Special Recognition) and 1 Bronze) at the National Veterans Creative Arts Festival in 2019. Ron’s essays and books have been translated and published in French, Albanian, and Ukrainian. His first recording, an EP titled Trying to Catch Amnesia, was released in June 2020. His book, Writing War: A Guide to Telling Your Own Story, serves as the curriculum for VWP creative writing seminars and workshops. Ron’s songwriting curriculum will be published by BCG Books. His memoir, Seriously Not All Right: Five Wars in Ten Years, is published by Schaffner Press. Ron studied creative writing in the MA in Writing program at Johns Hopkins, music (vocal performance) at Virginia Commonwealth University, and songwriting & guitar at Berklee College of Music. He is a faculty member at the University of Maryland. In 2017, Ron received the Johns Hopkins University’s Anne Smedinghoff award “a life dedicated to service, social justice, and a commitment to others.”

Dario DiBattista. Instructor/editor. Dario DiBattista served in the Marines and is a veteran of the war in Iraq. He is the editor of the anthology Retire the Colors: Veterans & Civilians on Iraq & Afghanistan. His writing has appeared in Washingtonian Magazine, the New York Times, the Washington Post, Connecticut Review, [Pank], Mic.com, and many other publications. Additionally, he’s been profiled in the New York Times and has been a commentator on NPR, SiriusXM, and for the BBC.

Colin Halloran. Instructor/editor. Colin D. Halloran is a combat veteran who served with the US Army in Afghanistan in 2006. He is author of the poetry collections Shortly Thereafter, which documents his experiences in Afghanistan, and Icarian Flux. His essays have appeared in such places as Retire the Colors: Veterans and Civilians on Iraq and Afghanistan, Proud to Be: Writing by American Warriors, and most recently Incoming: Sex, Drugs, and Copenhagen. His fiction was featured in the anthology The Road Ahead: Fiction from the Forever War. His words have appeared online and in print in Europe, North America, and Asia, but he can always be found at his website www.colindhalloran.com.

Jim Mathews, Instructor/editor. James Mathews holds a Master of Arts in Writing from the Johns Hopkins University. He teaches fiction at The Writer’s Center in Bethesda, Maryland where he also serves on the Board of Directors. He is a retired Chief Master Sergeant with twenty-seven years of military experience in both the U.S. Air Force and the Air National Guard. He has been deployed overseas numerous times, including two tours to Southwest Asia in support of Operation Iraqi Freedom. His fiction has appeared in many literary journals, including the Northwest Review, Carolina Quarterly, The Wisconsin Review and The Florida Review. In 2008, his collection of military-themed stories called Last Known Position which won the Katherine Anne Porter Prize for Short Fiction. More recently, his short story “Many Dogs Have Died Here” was included in the Best American Mystery Stories of 2015. His website is www.jamesmathewsonline.com

Carole Florman. Ms. Florman is the daughter of a WWII veteran and the wife of an Afghanistan veteran. She has worked in the Departments of Justice, Treasury and Interior, as a staffer on Capitol Hill and as a Vice President of the Corporation for Public Broadcasting. She was communications director for the Joint Congressional Committee on Inaugural Ceremonies for the inauguration of President Obama.

Ron Koshes, MD. Dr. Koshes served in the U.S. Army medical corps and is the former president of the Society of American Military Psychiatrists. He is the author of eight books including Kent-Jolie: A Green Fairy Tale and How We Think: Understanding the Stories We Tell Each Other.

Jeff Stein. Mr. Stein spent decades as a journalist including long stays with Congressional Quarterly and the Washington Post. He served as an intelligence case officer in the U.S. Army in Vietnam and is the author of the acclaimed Vietnam War exposé A Murder in Wartime.